Ok so I’m behind again. Here’s a quick update.

I did a lot of the typical touristy stuff in New York. By the end of my time there, I’d had enough of the crowds, traffic, honking horns and hot dog stands. But I had a great time – New York is certainly mind blowing. I got the opportunity to go to a New York Yankees baseball game (which they won), took the double decker bus tour around downtown, uptown and Brooklyn, went to the top of the Empire State building, watched Usher perform at the Rockefeller Centre for the NBC Today Show (when I say watched, I mean heard – couldn’t see much from the back of the crowd), took a cruise to Liberty Island to see the Statue of Liberty and Ellis Island where over 12 million people immigrated to America between 1892-1954. I find this amazing… in 1907 approximately 1.25 million immigrants were processed at Ellis Island in that one year – that’s the population of Adelaide. I hung out in Times Square daily, experienced the New York subway, paid my respects at Ground Zero and took a rickshaw ride around Central Park. I also managed to squeeze in three broadway shows – Sister Act, Memphis and Chicago. Memphis was by far my favourite. New York graced me with 5 days of perfect weather. After that it rained so I figured it was a good excuse to go shopping at Bloomingdales and Macy’s.

I have to be honest, it wasn’t all peachy in NY for me. I fight hard against the darkness that grief can bring, but sometimes it creeps up on me. Even with millions of people outside my doorstep, I felt so alone and all I wanted was to be with Cam. I was feeling homesick too, missing my family and my girls – I was in serious need of some girly company!

I started a three week tour from New York to Los Angeles yesterday. First destination: Washington DC where I am now. As I write this I am sitting in a park hand feeding almonds to some squirrels. My new friends on the tour are all really lovely and we’re only a small group of 5 ladies and 1 guy plus our female tour guide. Got my girly company after all!

Visited JFK’s burial and eternal flame yesterday at the Arlington National Cemetery and saw the changing of the guards at the tomb of the unknown soldiers. Did lots of walking today to see museums and art galleries, monuments and the White House. I am spent! Over the next few days we’ll be traveling to Virginia and Tennessee. Yeeha!!

Here are some pics…

View from the observatory deck 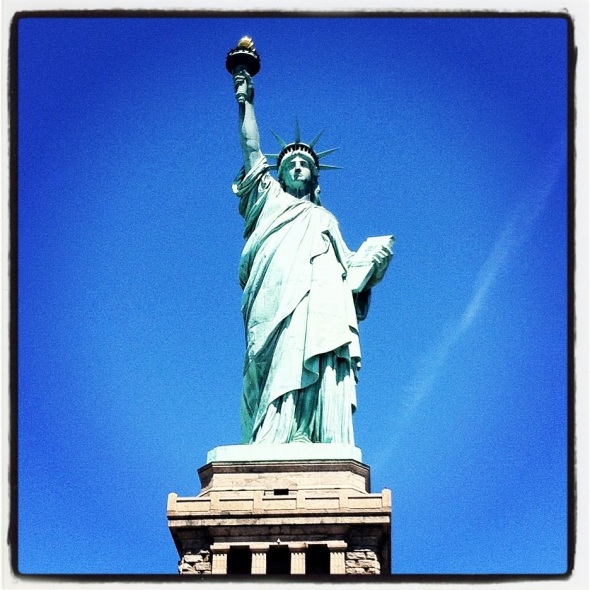 I’m going to try to give more regular (and brief) updates. Arrived in New York yesterday. I was quite overwhelmed as the shuttle bus driver drove into Manhattan (not to mention a little afraid for my life – oh my goodness the driving is C-R-A-Z-Y with a capital C). Seriously have to have your wits about you whether driving or on foot or you will get run over but a car, bike, truck, taxi, limo, bus, people or a hot dog stand. My hotel is right in the centre of Times Square, like right in the middle of all the chaos which is awesome. Close to everything one could ever need – clothes shops, shoe shops, tourist centres, sightseeing attractions, a million restaurants and other questionable street food stalls, electronic stores, hot dog stands. The thing I’ve had most difficult trying to find is fruit. Oh well, the clothes I came away with are already a little tight

I also went to the World Trade Center memorial. I felt like bawling before I even got into the plaza. It seemed like I was the only one affected that way out of hundreds lined up to get screened before we could access the memorial and even when we were inside. Maybe it was because my grief is still so raw, I don’t know. It just seemed more like a tourist attraction than a memorial. No one seemed to be still and quiet and reflect on the traumatic time it was, the thousands of lives lost, the thousands of people who risked their lives in the rescue mission, the families who are left with shattered hearts and the people who were there supporting them. It made me shed a few tears.

Tonight I got a cheap broadway ticket from Times Square to see Sister Act at Broadway Theatre which was great. I even sat next to a professional opera singer who is originally from NY but now lives in Germany. Never met an opera singer before – I can tick that one off the list! I look forward to catching another show or two before Tuesday!

I’m a bit behind with the updates so I’ll try to keep it brief. My time at the Ellel Ministries healing week was not at all what I expected. I didn’t realise the centre was on 140 acres of grassy fields, beautiful big oak trees covered in Spanish moss, a little pond (with a resident alligator) and all the space you could need to sit quietly with God. I went there of course expecting to focus on healing from grief but God had other ideas and He gave me clarity and freedom from burdens I wasn’t aware I was carrying.

Although I know God was carrying me through the most difficult days after Cam passed, I also felt quite disconnected from Him. I was angry at Him and I felt let down by Him. After Ellel, while I was driving to Georgia, I was thinking about something Cam said. Cam didn’t want anyone to say he had the “ultimate healing” if he died. His exact words from his blog are:

There is no disclaimer here, but if this carcass falls to the ground, I don’t want anyone to think or say ‘Well, he got the ultimate healing – no more suffering now’. No, this is not good enough, and it is not healing – it is being deceased, no more, kicked the bucket, passed a ‘use by’ date, carked it… dead. This is not healing, it is the hideously devastating consequence of sin in this world, and it should be hated for every right reason – it steals, kills, destroys. It is worthy of our hate, our anger, our disgust and our every effort to come against it in Jesus name.

Whilst I understand what he was saying and agreed at the time, I realised that the perspective I established from this was hindering my own inner healing. After Cam died, I naturally believed that he wasn’t healed. I was blaming God for not healing Cam. I didn’t blame God for Cam’s death, but I blamed Him for not healing Cam. No, he wasn’t healed in his earthly body even though we all prayed for this, but he didn’t die because God didn’t heal him. Like Cam said, death is a consequence of sin and the fallen world we live in. But the truth still stands that Cam is healed. In Christ, Cam is healed and whole and alive. Does is still hurt that he’s not here with us? Of course. It doesn’t hurt any less. But now my heart can heal while hurting. While I was blaming God, I was just hurting.

These verses helped me:

And Christ lives within you, so even though your body will die because of sin, the Spirit gives you life because you have been made right with God. (Romans 8:10 NLT)

A thief is only there to steal and kill and destroy. I came so they can have real and eternal life, more and better life than they ever dreamed of. (John 10:10 MSG).

After Ellel, I spent a little over a week driving through Georgia, North and South Carolina – including Washington, Atlanta, Athens, Toccoa, Brevard, Greenville and Charleston. I had the privilege of meeting several of Cam’s Camp Greenville friends. I will never get tired of hearing how amazing Cam was through people who were touched and inspired by him. It’s a beautiful testimony of God using one of his children as a vessel to show His character, His love and grace. I am so grateful to all of Cam’s camp family for sharing their stories with me and some great photos too!

On May 10th, I took Cam’s ashes to the Pretty Place chapel at Camp Greenville and honoured his wish to scatter his ashes there. God blessed me with a beautiful sunny day. I could see why Cam loved it so much. Tears flowed as soon as I arrived, before I even stepped into the chapel. The thought that first came to mind was what a journey Cam has sent me on. I would not be standing there if it weren’t for him. He continues to be a gift and a blessing to me. Thank God he is resting in peace.

Tonight I’m in Charlotte, North Carolina and my solo road trip has come to an end after almost 3 weeks of traveling through the south. Tomorrow I’m off to New York, New York! 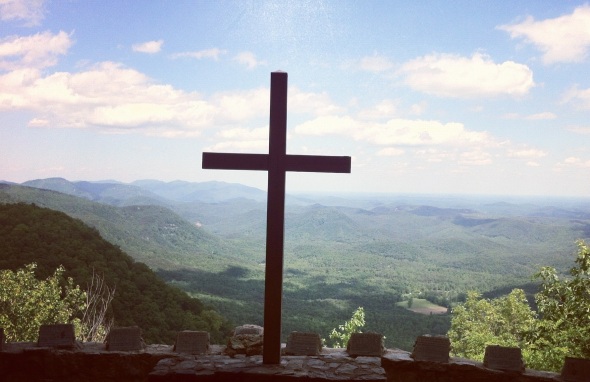 To pick up where I left off, I spent Saturday night in Venice, Florida with a lovely couple who were hosts of a spare room that they book out as B&B style accommodation using a website called AirBnB. They kindly invited me out to dinner with them and they graciously offered to take me in their car. On the way back from dinner (with bellies overfilled with Italian), we were unfortunate to be in a car accident. We were driving on a main road, a young driver wanting to turn left onto the main road from a street that was on our right (for those back home who drive on the left – think opposite), apparently the young driver didn’t see us and failed to give way, leaving us nowhere to go but head on into the driver’s side of the other car. The airbags in the car I was in went off, causing minor injuries to my two friends in the front. The ambulance took one of them to hospital to get checked out and they were discharged later that night. I was sitting in the back so thankfully I came out unscathed. Unfortunately both cars were badly damaged and had to be towed away. But, I got to see the whole works – police, firies, ambulance, flashing lights and one very serious looking state trooper with a very serious hat (did I mention he was serious?).

The massage at the Warm Mineral Springs the next day came at a good time. It was nice to be able to unwind after the events from the night before. Even if I was the youngest person there swimming in the fountain of youth.

I’m now in Tampa, Florida attending the 5-day Healing Week at Ellel Ministries. It’s only been 2 days and God is already drawing out emotions from deep within. It’s been unexpectedly uncomfortable. I suppose transformation is not meant to be comfortable. I think back to my time of transformation before I found faith last year – it was not a time where I felt warm and fuzzy. There were tears and emotions coming to the surface that I didn’t understand, frustrations and new beliefs that I struggled to accept. Thankfully then I had Cam holding my hand walking me through every step of the way. Now I have to learn to lean on God every step of the way. It’s a valuable lesson but it’s not easy when you’re confronted with pain you didn’t realise was in your heart. I’m learning more and more that he’s a gentle God and He sets a pace for inner healing that’s just right for us, and it’s not an overnight process.

Opening it up to y’all now: What have you experienced during times of transformation and inner healing?