What is the Colour of New Life?

Last Saturday I visited some friends in the Perth hills who sadly lost their house in the Stoneville fires on 12th January 2014. They shared with me their story and we went to see the ruins of their family home that they shared with their three boys.

At 11am on Sunday the 12th, the fire began, unbeknownst to Nicki and Campbell. By 11.30am they could smell smoke and hear helicopters close by. At 12.00pm the helicopters were flying directly overhead. They had not received any official communication to evacuate but Nicki sensed it was time to take the boys and leave. Campbell stayed to pack a few things. By 12.45pm Campbell was driving away from their house up their driveway that was lined by flames. By 1.30pm, their house was burnt to the ground. Two hundred metres away, you couldn’t even tell there were fires. Fifty-six houses were tragically lost that day. The lives of 56 families turned upside down in two hours. Fortunately and miraculously, there were no lives lost.

We went to see the ruins of their house. I’ve never stepped close to a home destroyed by fire, I’ve only ever seen it on TV. I found it to be fascinatingly tragic. Seeing the tragedy of every item you held dear due to a memorable moment in time. Lost. The things that are irreplaceable. Photos, letters, cards and love notes, a special gift from a loved one lost, an original painting, a piece of art you created, a favourite dress, a family heirloom. At the end of the day, Nicki and Campbell, along with their family and friends, are grateful that they are alive. That’s the healthiest perspective you could have in a difficult situation like this. But this doesn’t change the fact that it’s simply crappy that this happened to them and that they have lost so much. They will rebuild and they will be able to buy new things to fill their new house. But two things that will stay with them for a long time to come that will appear at unexpected times – the memories of the things lost and the fear of losing to a fire again.

My heart broke for them but yet they didn’t assume a position in need of sorrow or pity. They want to get on with life, start anew with the opportunity given to them to rebuild a home of their own design. They have moved into a rental house close to their home which means they are still close to work and school. The next 12 months will have difficulties of course. As if building a home isn’t stressful enough but to have to continue to maintain routine for their children, in a home that isn’t theirs, with a collection of things in it, which have graciously been donated by locals, but also aren’t their own.  Although the ‘stuff’ is insignificant in the grand scheme of life, but we get attached to our comforts and it would be difficult to start all over again.

Nicki and Campbell kindly allowed me to post these photos of the remains of their house.  While we were there, I observed a special moment that I tried to capture on the trusty iPhone camera.  Standing in her driveway, looking at the ruins of her house, I watched Nicki delighting in dozens of black cockatoos flying over us, nesting in the blackened trees high above us, amazed at their presence in charcoal trees.  Earlier she told me that she went shopping to buy a new dress that morning as she wanted to have something nice to wear to go out to dinner that night with me and some other close friends.  She struggled with this as she didn’t want to buy another dress.  Minutes before she evacuated her house three weeks earlier, she put her hands on her favourite dress.  A dress she has had for 15 years.  A dress that always made her feel good when she wore it.  She physically had her hands on it to take with her but decided against it as she thought to herself “I don’t need to take that.”  In the moment I observed Nicki smiling at the black cockatoos, standing in the dust of her lost possessions, glowing in her brightly mesmerising new dress that she didn’t want to buy, I saw her beauty in the tragedy of loss and the new beginnings to come.  I saw the colour of new life. 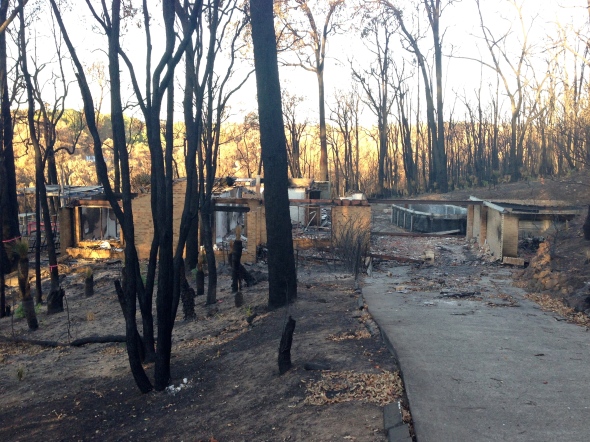 The driveway to a picture of loss

The ashes of a place once a home to a beautiful family of five.

The Colour of New Life.

This entry was posted on 15 February 2014 by Ash. It was filed under Shades of Life .